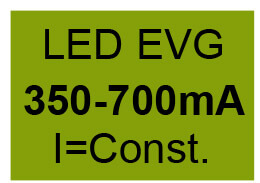 How it all started with 350mA ECGs for LED!

The breakthrough of LEDs began with the so-called power LEDs. These were "energized" with 350mA. Many users spoke of the "1W operation" of a LED. Higher currents were not usual for the service life and necessary heat dissipation. The demand for LED drivers with 350mA current is correspondingly high.

Yes, they began to connect LEDs in series. Thus, several LEDs could be operated via a 350mA ECG. But more than eight LEDs were rare. 350mA LED ECG with max. output voltage higher than 24V was taboo.

Today, LEDs with 350mA are still popular. This ensures low heat development, higher efficiency and longer lifetime than operating a LED driver with constant currents of 700mA or higher..

The worry of higher output voltage is also a thing of the past.

For example, with the 350mA LED driver Maxi Jolly HV 122414 it is possible to efficiently operate 30 LEDs in series on one string.

Skeptics fear that if one LED fails, the entire LED chain will fail. Experience has shown that LEDs, due to their nature and internal protective diodes, end in a short circuit in 95% of cases in the event of a defect.

So the current can continue to flow and only this one LED is perceived as faulty at most.

Wherever sustainability, long lifetime and reliability are important, LEDs still like to be driven by 350mA LED drivers. Especially the street lighting sector still likes to use LED drivers in 350mA operation.

In the early beginnings of LED, low-power LEDs were used. Usually 10mA constant current was used for one light emitting diode. This was mostly realized by using a series resistor of approx. 270Ohm for operation at 5V. With a forward voltage of approx. 2. 5V and a current of approx. 10mA at the series resistor, the missing 2. 5V dropped off.

Around 2009, a power of 1W could be converted into light by using so-called power LEDs at a current of 350mA. The constant current control by means of a series resistor would have become true heaters. Accordingly, the constant current via pulse width modulation (PWM) was used in modern LED drivers via clocked controllers.

Operation with 350mA was almost standard.

Today with more and more powerful LEDs it is no longer a problem. Even currents of >1A with appropriate heat dissipation bring an excellent price-performance ratio.

LED drivers are often set to 700mA as a good compromise. This corresponds to a power of approximately 2. 5W per LED.

Effect of the currents on the LED

Small currents for a LED mean:

In the meantime, more and more current sources with 700mA are being used, as LED technology has improved considerably in recent years.

ECGs for LED currents of 700mA are now widely used. In the above selection you will find a variety of LED ECGs, which can be set to 700mA via dip-switches.

It goes without saying that these two values are not mandatory. Currents of 500mA are also used with pleasure.