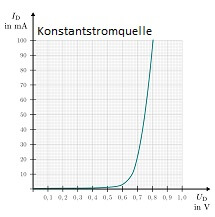 We are often asked by customers:

"Constant current source/drivers or constant voltage supply? Where is the difference?"

Up to now one had always oriented oneself to voltage. 12V or 24V DC voltage and the current depends on the consumption. The constant current power supply unit must be powerful enough to guarantee the operating voltage that is then reached..

Now, however, with the LED as a light source, a consumer is no longer connected that can be uncritically operated at a constant voltage, such as from a battery. Small voltage differences only lead to small fluctuations in power consumption. 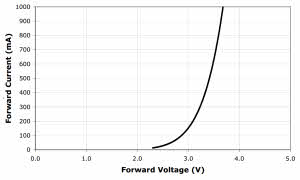 LEDs, on the other hand, have a completely different behavior. Their characteristic curve already causes large current changes with small voltage fluctuations. See sketch on the right.

Even if it is possible to keep the voltage exactly at e. g. 3. 3V constant to obtain a diode current of approx. 350mA, the operation is not stable. The characteristic curve changes continuously depending on the operating temperature and ageing and scatters from diode to diode. Safe operation is not possible and thermal destruction with small fluctuations is quickly possible.

Common current values for LEDs are:

Watch out. There are LED light sources, such as GU5.3 (MR16 LED spotlight) or LED modules, which already have a built-in constant current driver. These are operated conventionally with constant voltage.

Links to further information we have put together here: