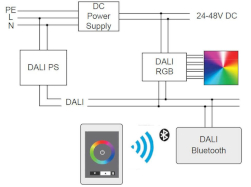 An on / off switch techniques was a day before yesterday. Dim light was yesterday.

Todays modern lighting control systems allows fully automatic service via motion or light sensors. That is one of many capabilities for saving
energy. Programable systems allows individual lighting control. And even without any line placements. Combinations of DALI components and
Enocean radio allow easy and quick installation without additional cabling. Visit our pages to see, what else is possible today.

An on / off switch techniques was a day before yesterday. Dim light was yesterday.

Todays modern lighting control systems allows fully automatic service via motion or light sensors. That is one of many capabilities for saving
energy. Programable systems allows individual lighting control. And even without any line placements. Combinations of DALI components and
Enocean radio allow easy and quick installation without additional cabling. Visit our pages to see, what else is possible today.

Lighting control, especially LED lamps and luminaires, but how?

DALI is a two-wire system which is wired in parallel to the 230V supply. Simply lay the 5-core cable instead of the 3-core cable. Then connect a DALI controller as "boss" to the bus and, if not already in the controller, an additional DALI power supply.
The individual devices can then be addressed and programmed using free PC software and DALI USB adapter.

Via Enocean radio to DALI

If the additional two bus lines mentioned above are missing, Enocean radio will help.The buttons transmit via 868Mhz radio to the Enocean DALI Controller, which then controls the connected lights. Often a bus can be laid in the ceiling afterwards.

Well-known conventional technique. The ballasts have an analogue input. An external voltage of 1-10V can be fed in there. The ECG then dims accordingly. The connection is often active, so that the connection of a 100KOhm potentiometer is sufficient.
Attention when connecting ballasts in parallel (several 1-10V inputs in parallel on one potentiometer). The resistance value must then be halved (at 2), divided by three (at 3).

The good old wall dimmers for leading / trailing edge control should have been obsolete long ago, because with the introduction of LED technology they are no longer suitable. They were designed to control resistive loads such as incandescent lamps. Nevertheless, there are also LED ballasts which work more or less with this control. Disadvantage is the low compatibility and limited control. Low values can lead to flickering or sudden shutdown.

Every smartphone has a Bluetooth interface. It is therefore obvious to simply integrate a corresponding receiver module into the luminaire. Modules in the size of a matchbox have proven themselves with the name Casambi. UAnd for comfort, there is even an attractive Casambi wall switch, which can be mounted as required. Or a Casambi Switch Interface for the flush-mounted box.

Digitalstrom is actually Powerline-Communication. Instead of the well-known chandelier terminals, similar terminals are now used, but with intelligence. Every electrical consumer is now given a virtually "switch". The corresponding commands are then sent over the power supply line via a central server.

Fast light changes for stage lighting and discos - that is something for the DMX bus. Similar to DALI, all luminaires are connected to a bus system. Only the bus wiring is much more demanding, but very fast. Further detailed information on lighting control can be found here.

More and more this sytem becomes famous, because of cheap gateways and components. It is easy to connect into smarthome systems. For easy lighting control find zigbee LED drivers and other zigbee hue devices here.

And many othersThe systems listed above are considered to be widely used and established. In addition, there are many different solutions available on the market, especially with Smart-Home, some of which are stand-alone solutions. Occasionally, these then fall back on the above standards.
Viewed
LED Service 4 U