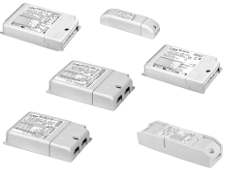 LED Drivers and other Control Gear

For professional use in LED lighting. Luminaire manufacturers can find a large overview of LED Drivers with varied control options via:

LED Drivers and other Control Gear For professional use in LED lighting. Luminaire manufacturers can find a large overview of LED Drivers with varied control options via: DALI -... read more »
Close window

LED Drivers and other Control Gear

For professional use in LED lighting. Luminaire manufacturers can find a large overview of LED Drivers with varied control options via:

LED lamps and luminaires are gaining ground. More and more manufacturers are starting to implement their own ideas here. This is accompanied by the inevitability of dealing with new technology. The properties of the LEDs used, only contribute in part to the complete specification of an LED luminaire. The LED driver used plays a key role, especially in terms of service life, dimmability and system light efficacy. These characteristics of an LED driver are explained below for our customers and readers.

What is a LED driver?

In contrast to a constant voltage source, an LED driver functions as a constant current source. This "drives" a constant, controlled or limited current through an LED or LED module. Unlike incandescent lamps, for example, controlled operation of LEDs via a constant voltage is not possible. Thus so-called current driver circuits are integrated here. Accordingly, LED drivers are special operating devices for LEDs and LED modules. See also constant current sources. When attempting to operate an LED with a constant voltage, small specimen variations, temperature fluctuations and age-related changes are sufficient to allow the current to grow into uncontrolled quantities. These then usually lead to a premature failure.

On the one hand, people like to advertise the high durability of LEDs, as long as a sufficient coloing of the LEDs is ensured. On the other hand, the operating conditions for the LED driver integrated in the luminaire housing must also be correct. For example, data of ta = -25 - +50°C (ta = temperature ambient) and a lifetime of 50,000 hours can only be expected, if the temperature is maintained at the tc point (tc = temperature case), e. g. <70°C.
Usually the LEDs are cooled via the housing, which is often already a steamy environment for the LED control gear. This is often the reason why manufacturers sometimes operate the LED control gear in an external housing.

By the way, a high tc value does not automatically indicate that the LED driver can also be operated at higher ambient temperatures..
As a general rule: the lower the temperatures in and around the LED driver, the longer the electrolytic capacitors will last.
Further articles on this topic can be found here.
The topic of switching frequency as a characteristic that determines the lifetime is more applicable to the switch itself, since the inrush currents of some LED operating devices can be unexpectedly high and can cause some fuses to trip. These inrush currents can assume values of 5-20A for a short time (e. g. 50µs). If several devices are operated in parallel, the fuse will react.

Whereas luminaires with energy-saving lamps or incandescent bulbs could previously be dimmed simply using triac dimmers (trailing edge control), it is important to take a close look when replacing LED luminaires. If this contains a suitable LED control gear such as the proven DC-Jolly-MD from the company TCI, it can be replaced. Knowing that it is no longer possible to dim down completely to zero via this operating mode. This LED driver is one of many examples from the universal product family of TCI from Italy.
With the "Jolly family" TCI offers a wide range of operating devices which, depending on the selection, enable the following operating modes for dimming LEDs:

The LED driver is permanently connected to the supply voltage 230V AC. A line is wired between phase and key input via a push-button instead of previously the switch). The lamp can be switched on or off by briefly pressing the buttons. If the button is pressed longer, either up or down is dimmed.

The LED control gear, often also called LED converter, is controlled by means of a potentiometer (with activated 1-10V interface) at the two relevant connections. Alternatively, an equivalent DC voltage can also be applied.

Some of the LED drivers also have a DALI input (DALI = Digital Addressable Lighting Interface). This bus system allows each luminaire to be controlled individually via addressing.
Not yet supported by the Jolly family, but mentioned for completeness:

A symmetrical transmission method with low voltage levels between ±1. 5 V and ±5 V. These must be routed separately from the mains cable. This technology is often used in stage and event technology. So far only a few LED drivers are compatible with this controller.

System light efficacy is defined as the consideration of the entire chain of electrical energy in, light out. The product of all efficiencies often results in a sobering value. Usually a system consists of

Use of a good LED driver with 90% efficiency and other values from the table above:

Use of poor LED driver with 70% efficiency:

It is not only worth investing in the best LEDs, all components have to play along

In addition to efficiency, operating temperature, tc, dimmability and operating current, there are other criteria to consider when selecting a LED driver.

As far as not available in data sheet, contact us.