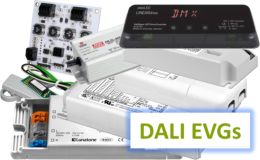 Why is DALI again experiencing an increased demand with the introduction of LED technology? It is simple. If LED luminaires are to be dimmed, an electronic ballast (EB) is required. In addition to 1-10V, push-button dimming, DALI ECGs have become more and more popular.

Conventional luminaires were previously equipped with light sources such as incandescent bulbs, halogen lamps or energy-saving lamps or tubes. Even if the latter were no longer quite so suitable for dimming, commercially available wall dimmers with phase control or section control via Triac or MOSFET could be used.

These were developed in the age of the incandescent lamp/halogen lamp and were excellently suited for regulating the brightness.

To operate LEDs, a constant current is required which prevents the LED from being overloaded. This special electronic control gear requires 230V mains voltage on the primary side and can, however, do little with the "bent" alternating current sinus of a dimmer.

If it is tried nevertheless, then depending on the dimmer the following behavior shows up.

But there are LED lights which are dimmable as usual. . . ?

That is right. This can simply be done with a LED driver DALI.
These contain a LED driver that was developed for use with wall dimmers. The Jolly MD dimmable should be mentioned here in particular, which, depending on the jumper setting, can be dimmed via phase segment operation in addition to 1-10V or push-button operation. The manufacturer has succeeded in ensuring broad compatibility.
But here it is also not possible to regulate the light evenly down to 0% brightness. This is because the driver also requires a residual voltage for safe operation.

The solution is lighting control via a DALI control gear.

DALI as a control bus for transmitting various signals from a central location to all connected luminaires as a "basic command" or individually addressable enables convenient control of the luminaires. Of course, this also includes a complete dimming of the brightness over the usual range.

In addition to the dimming function, the control of LED luminaires via DALI also enables the option of centrally programming each individual luminaire and assigning it to different groups. In such a way that it is no longer necessary to plan circuits for individual light switches. This can be individually adapted to the respective situation at any time and also subsequently. Examples are open-plan offices or warehouses, where the lighting situation often has to be adapted for organisational reasons.

Transmission of DALI signals - but how?

If a new building is installed, it is advisable to plan the lighting installation including DALI bus from the outset. This is simple. Instead of three-core cables, five-core cables are now laid throughout. What is connected to it and whether it is fully used does not matter. You are completely flexible with DALI Bus. Due to the "slow" data stream, a "chaotic" cable routing is possible. This means you do not have to pay attention to star, circle or chain connection. It may be wired identically to the 230V wiring as required. Even the polarity of the DALI lines is irrelevant.

But how do I do this with DALI in existing buildings?

Who would want to knock open the walls and lay new cables in a beautiful old villa when converting to LED with DALI? Surface-mounted wiring is also not desired.

There areEnocean wireless solutions, which, via a gateway with integrated DALI controller, enable fast and convenient installation without large additional wiring from the light switch to the LED light.

A popular method is analog control via a 1-10V potentiometer. The ballast in the luminaire receives a voltage between 1V and 10V at a special control input and regulates the brightness of the lamp accordingly. This 1-10V input on the ECG is potential-free. A distinction is made between active and passive connections.

However, if only one ECG with 1-10V interface is available, so-called DALI 1-10V interfaces can be used. Thus an existing ECG is extended to a DALI ECG.

Conclusion on the use of DALI EVGs

DALI is attractive again. The demand for DALI devices, in particular the DALI USB adapter as the link between LED luminaires and computers with DALI master PC software, is increasing. If you want more than just switching light on and off, DALI is the standard solution today.